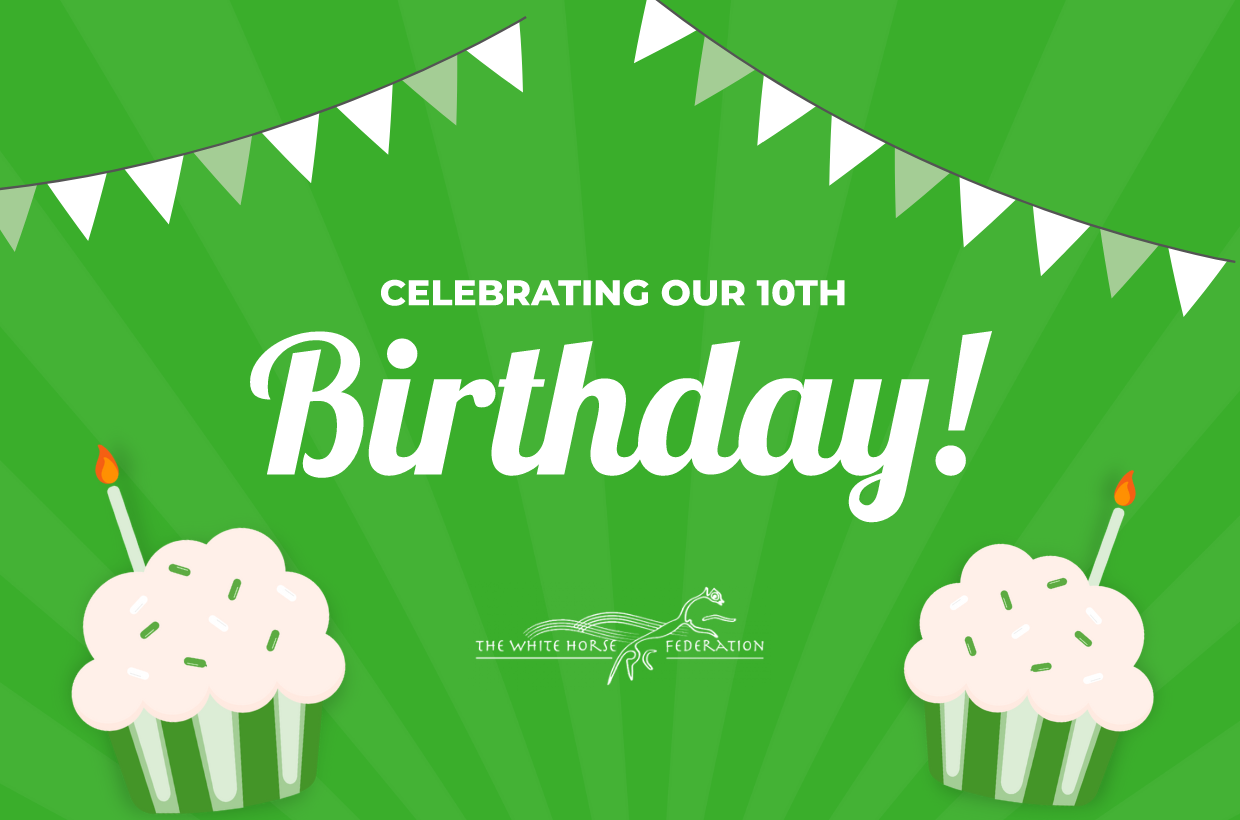 Celebrating Our 10th Birthday: The Story So Far

On 18th May 2012, The White Horse Federation was officially incorporated as a Multi Academy Trust. Since then it’s been on an incredible journey of development and growth.

In this article, we tell the story of how the trust has grown and improved, while keeping to its core values.

Within the first few years, Haydon Wick also joined the trust as an outstanding school.

Based on the success of the founders’ leadership at their original schools, the federation was set up with a goal to provide mutual support that was previously absent, and to build an organisation where staff and leader development was a core principle.

Central to achieving this goal was the foundation of the Swindon Teaching School, which was officially accredited in 2012.

Supporting the trust’s schools, the STS focused on classroom-based learning and talent development for the internal promotion of school leaders.

With mutual support and staff development as a foundation, the trust started to see results as it took on and transformed new member schools. Two of the best examples include Zouch Academy, and West Kidlington. Both were in special measures when they joined the trust. Following their most recent Ofsted inspections, both are now rated good, and leaders from these schools now help support other improving schools across the trust.

A great example of this model is the relationship between Zouch Academy and Southbroom Infants School in Devizes. Having successfully led the school’s dramatic improvement, Nina Johnson, Zouch Academy Principal, now spends one day each week at Southbroom giving mentoring support and advice to its leadership team.

By building on this solid foundation, the trust now boasts an outstanding record for developing leaders and principals. Out of 25 primary schools, 12 principals are fully homegrown, having initially started as class teachers.

Following the initial success of schools in the trust’s Swindon core, the Federation received numerous applications to join from schools around the South West. Those who were highlighted as having the potential to benefit most from the trust's model, without negatively impacting progress at other schools, were the trust's main focus.'

While more applications were turned away than accepted, the trust continued to grow significantly, with schools such as Southbroom, Devizes, and Larkhill joining in Wiltshire, St Mary & All Saints and John Madejski Academy in Reading, and Southwold and West Kidlington in Oxfordshire.

The trust then grew even more significantly, taking on several schools in Melksham in 2018, a fantastic addition to the trust family.

More recently, the federation was recognised as an excellent developer of schools after it was awarded the contract to open two new schools in Bicester. While still in early days, both Gagle Brook and Whitelands highlight the positive impact of the White Horse Federation model, which provides plenty of support for new members, while allowing schools to retain identities specific to their local community.

As the federation heads into its second decade, we’ll be sharing some of the best stories and reflections from staff, pupils, and our school communities. If you’re a current or former member of staff, student, or parent or carer, use the forms below to submit your stories and memories.