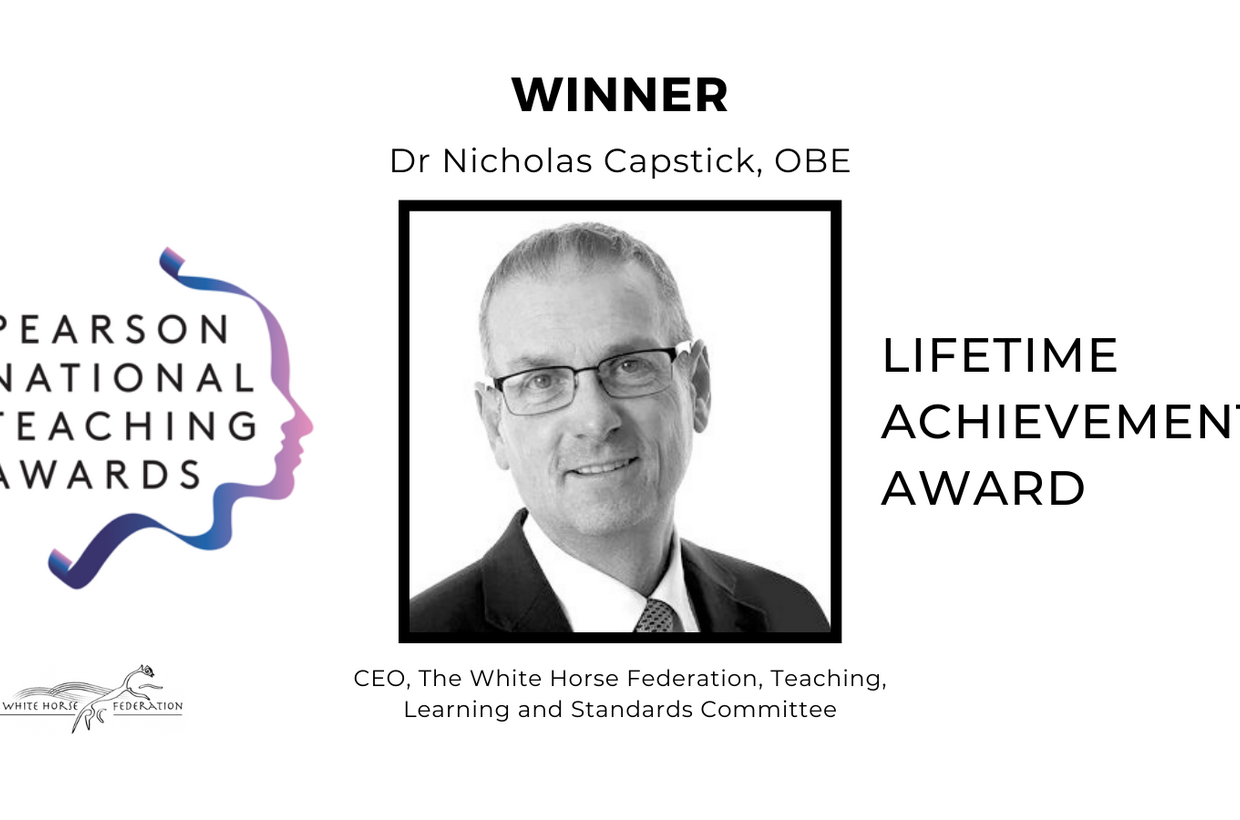 Every year on National Thank a Teacher Day, the National Teaching Award winners and nominees are announced. This year, we are delighted to announce that our CEO and founding member, Dr Nick Capstick OBE, has added to his already impressive list of honours, by being awarded a Silver Lifetime Achievement Award, one of only 80 awarded nationally.

An outstanding accomplishment in its own right, the award also puts Dr Capstick on the shortlist for a Gold Lifetime Achievement Award to be announced later this year.

This year, Nick will leave our Trust after ten fruitful years at its head, and after decades more transformative time in education including twelve years as the head of Drove Primary School. In recognition of the truly incomparable work Dr Capstick has carried out in leading our trust to the strong position we are now in today, we decided to nominate him for this year’s lifetime achievement awards.

For our nomination to have inspired the Judges at the National Teaching Awards, including Trust President, Michael Morpurgo, to award Nick with a Silver Lifetime Award and to shortlist him for a Gold Award is as much an honour to the White Horse Federation community as it is a testament to Nick’s tremendous track record as a leader in education.

The Pearson National Teaching Awards is an annual celebration of excellence in education, set up to recognise the invaluable contributions made by teachers and staff at schools and colleges around the country. This year, the announcement of the Silver Award Winners is part of wider celebrations for national ‘Thank a Teacher Day’, and we’d like to encourage anyone reading this to take opportunity to let us know about a teacher or school staff member you’d like to thank for helping you in your life, or in a child’s.

This Lifetime Achievement award adds to Dr Capstick’s past official honours including:

However, more important than individual awards, the award caps off a career in which Nick has helped transform the lives of countless teachers, pupils, and staff as a National Leader of Education, the head of The White Horse Federation, and as a dedicated educator.

As we head into a new era at TWHF, we are proud to have been led this far by a character of such exceptional quality and reputation as Dr Nick Capstick OBE. His outstanding work will stand us in good stead for some very exciting years to come.