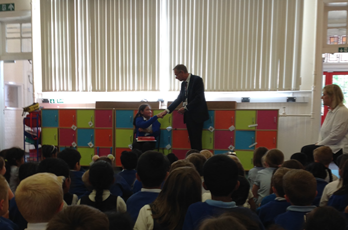 Tests are not usually something pupils enjoy. In fact, some will try almost anything to get out of them. Being hit by a bicycle on the way to school would be a more than good enough reason to miss a test, but nothing was going to stop Tamia.

Tamia is a year six pupil at Gorse Hill Primary School who recently took her SATs despite having two broken or fractured bones in her wrist. In an assembly, we celebrated her strength, bravery, and determination as she was presented with a very special award from The White Horse Federation’s CEO, Dr Nicholas Capstick OBE.

Tamia’s story is an incredible one that demonstrates such courage and commitment. As she walked to school on the morning of her first exam, a cyclist failed to stop at a pedestrian crossing and crashed into her. The horrifying collision saw the cyclist career off his bike, and Tamia knocked to the floor. However, after being helped by motorists and passersby, Tamia bravely carried on her journey to school.

Upon arriving, she checked in at the school office. When asked how she was, Tamia said she felt a bit of discomfort but was determined to stay at school and complete her morning SATs paper. After being consulted, Tamia’s parents agreed for her to stay and sit the exam, which she courageously did with the aid of a scribe.

Following the test, Tamia returned to the school office where she saw Laura Collins, Gorse Hill’s education welfare officer. Laura said: “At this point, she was unable to wiggle her fingers or turn her wrist. By this time, her parents had arrived and took Tamia to hospital.”

For most children, the pain and trauma of the situation would have been overwhelming. Tamia? Well, she didn’t bat an eyelid, even as she was being taken to hospital. The doctors soon revealed that Tamia had suffered one broken bone and one fractured bone in her right wrist. Despite this distressing diagnosis, Tamia has since been in school every day, and completed all of her SATs.

Tamia’s determination has inspired staff and pupils at Gorse Hill Primary School and beyond. When Dr Nicholas Capstick heard what happened, he knew Tamia’s resolve was something to be celebrated.

Dr Capstick said: “Tamia is without a doubt one of the bravest, most committed pupils I have ever come across. Though it was deemed safe for Tamia to sit her SATs, to have done so under such trying conditions speaks volumes to her dedication and courage. It was a pleasure to present Tamia with a special award for practising many of the values taught within The White Horse Federation’s schools.”

Nobody could be more deserving of the praise, recognition, and unique award than Tamia, and we are sure her story will continue to inspire everyone at Gorse Hill Primary School and across the federation for years to come.