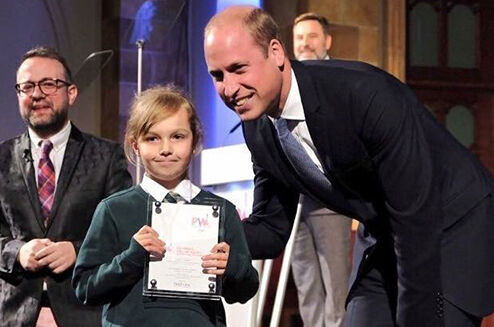 On Tuesday, Molly, a student at The Croft Primary School, was presented with the Graduate of the Year award by the Duke of Cambridge after excelling in The Prince William Award programme.

The presentation took place at a special ceremony at the University of Birmingham for schools and children who took part in the programme. Schools from across the United Kingdom participated, with Molly being one of only three children to receive the Graduate of the Year award.

Molly’s mother, Sarah, accompanied her daughter to the ceremony, along with three other pupils from The Croft, Deputy Headteacher Amy Knight, and Molly’s teacher during the programme, Beth Webb.

Sarah said the ceremony was “an amazing experience.”

“Being at the ceremony was a dream come true.”

When Molly stepped up to receive the award, Prince William asked her what her favorite part of SkillForce was. Sarah said that Molly was “starstruck”, but getting up in front of a large audience showed just how much her confidence had improved.

The Croft had been chosen as one of four schools in England to meet the Prince, meaning pupils had the chance to speak to the Duke of Cambridge about their experience on the programme.

“Prince William was a lovely man”, Sarah said. “He made time to speak to the children and he really engaged with them and was interested in their comments and answers. It was a privilege to meet him and to find out he really is a lovely and kind man.”

The Graduate of the Year award is presented to pupils who have used the skills learned during The Prince William Award programme to significantly improve their character, resilience, and confidence.

Sarah has seen a huge improvement in Molly’s confidence since she took part in the programme. She said: “Molly’s been amazing. She’s just grown in confidence. When she started off, if people talked to her, she’d talk to the floor. The confidence it’s given her is just amazing.”

The Prince William Award programme is conducted by SkillForce, a national education charity whose Royal Patron is the Duke of Cambridge.

The programme runs throughout a full academic year, encouraging the use of various physical and practical skills to drive personal development, build relationships, support cooperation, and enable children to contribute to the community and environment.